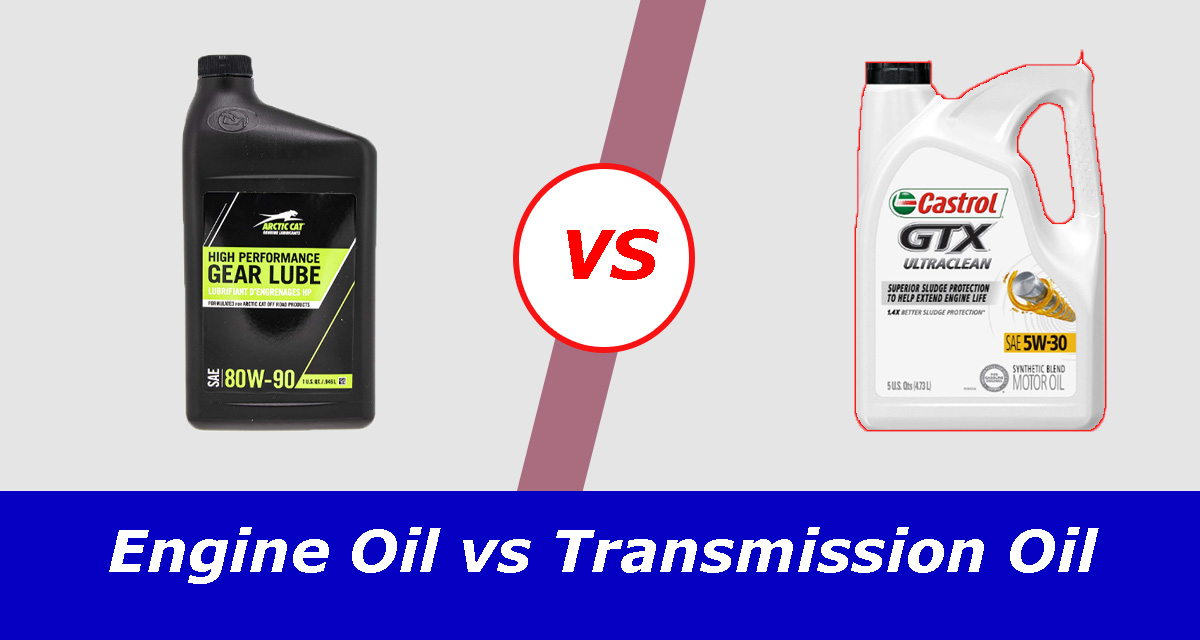 Engine oils and lubricant oils are the most common lubricants that people use in cars. However, people often get confused about these two different types of oil and their usage.

You might also be wondering, “Is engine oil the same as transmission oil?” If you are searching for an answer to this query, then you are just in the right place.

This piece of writing solely aims to clarify your confusions, and educate you more about the use and characteristics of these two important substances.

Let’s get to Know about the Substances!

What is Engine Oil?

Engine oil, also known as motor oil and engine lubricant, is used to lubricate internal combustion engines. Engine oil helps to reduce friction and wear on moving parts, so that the engine can function perfectly for a long time. Compared to transmission oil, engine oil is much more heat resistant.

It neutralizes the acids that originate from fuel and lubricant oxidation, improves the sealings of the piston rings, and carries heat away from the moving parts in order to cool down the engine.

What is Transmission oil?

It secures power transmission for a long term, and makes driving more comfortable providing smooth transmission shifts. The best thing about transmission oil is, it does not need to be changed so frequently like engine oil does.

How do Engine Oil and Transmission Oil differ from each other?

Though some people think engine oil and transmission oil to be the same things, there are considerable differences between them in terms of usage and characteristics. The section provided below aims to identify these differences:

Engine oil is generally used for lubricating, or aptly greasing the internal combustion engine. To simplify, engine oils are used when the friction between the moving parts is needed to be minimized.

On the contrary, transmission oil is used on the steering system in order to ensure a smooth operation. It usually comes handy in automatic transmission vehicles, and it improves the communication of gear systems.

Engine oil has an amber color, but it becomes darker as you use it over and over again. The murky color it turns into afterwards, is nothing but an indication of high heat and contaminants. If we talk about transmission oil now, it’s color varies from green to red.

The usage time of these two oils vary as well. In order to eliminate the contaminants, the engine oil needs to be drained from time to time. However, the case is not the same for transmission oil. It is rather a closed system which does not experience contaminants and lasts for a comparatively longer period of time.

Engine oil is used for improving sealing, keeping the engine cool, protecting rust and corrosion, and for lubricating the engine parts. On the other hand, transmission oil serves some other purposes which are not similar to the purposes of engine oil.

How to tell engine oil and transmission oil apart?

It is simple to say that engine oil is for engine and transmission oil is for transmission, but it can be really confusing to identify them sometimes. And using one of them in the place of another, can cause some serious damages indeed.

To identify them appropriately, you need to start with the color. There is a common belief that transmission oil is always brighter than engine oil. However, due to increased requirements for efficiency, transmission oils today have higher additive content compared to what they had in the past. When a lubricant has more additive, that means it is supposed to be more darker, and so more difficult to distinguish from engine oil.

Automatic transmission oils or ATF are also no longer exclusively red in color these days. It has been a few years now that the ATFs have been available in a number of different colors. You can find them in almost all the common colors now, including blue, green, yellow, and red. To make things even worse, modern engine oils are nowadays colored according to the OEM specifications. All these means, it is no longer a good idea to distinguish between the oils considering the color they come in.

The next characteristic that is mostly used is viscosity. In case of automotive lubricants, viscosity is generally specified in accordance with the SAE classes. When engine oil and transmission oil is compared directly, this classification confuses typical users. To give an example, an engine oil with SAE 10W-40 is almost twice as viscous as transmission oil SAE 75W-80.

This is a bit inconsistent with the common scenario, as the numeric values tend to suggest the opposite. It is true that the type of specifications appear to be the same, but it is done following two different SAE Standards. Generally, transmission oil is comparatively thinner than engine oil, but fuel efficient engine oils like 0W-20 or 0W-16 cannot be differentiated from modern transmission oils in their viscosity, unless any measuring technology is used.

The discussion above clarifies that, differentiating between engine oil and transmission oil at first sight can be difficult even for the experts. Therefore, it is always better to pay attention to the label while buying. The labels are there to help you distinguish the lubricants from each other, and thus you should follow them to buy the right one that you need. Also, if you are confused, you can always ask the seller about the product, and in case of buying online you should always have a go through the product information.

Time to wrap it up!

The one sentence that should clarify all your major confusions is, that the engine oil is used for the engine and the transmission oil is used for the gearbox. Though these lubricants seem to be the same in plain sight, you should never be confused between the two as they hold different significance. They are distinct, and they are meant to be used for different purposes.

Using one of them in place of another can lead to major damages. This is why you should always be cautious to apply the right fluid in your vehicle, and try your best to avoid facing unnecessary problems.