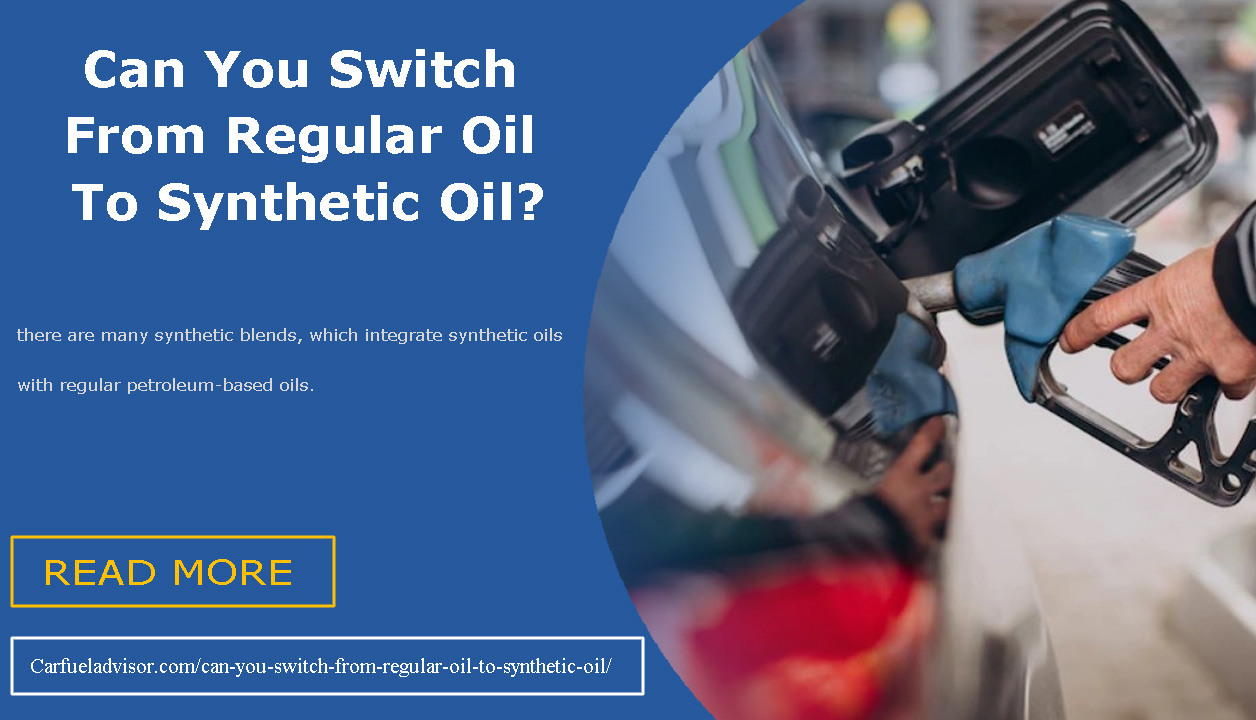 Although most modern vehicles, trucks, and SUVs use synthetic oil in their engines, a handful still uses traditional fuel oil as their major source of lubrication. You may have questions like whether or not you can swap between conventional and synthetic lubricating oil after your oil change.

Although synthetic oils provide more protection than traditional lubricants, switching between 100% synthetic and conventional oils will not harm the engine. Certainly, this is dependent on the present state of the engine and the purity of the conventional oil used.

What is synthetic oil?

Synthetic motor oils were created to resolve a significant issue that all combustion engines face every time they start: oil and solvents do not mix properly. Engine oil is intended to lubricate moving elements within the engine, particularly those near the combustion chamber.

However, most lubricants are petroleum-based and act as solvents, washing away traditional oil that coats components.

Lubrication is especially critical at start-up since up to 75% of incomplete combustion occurs during this time. Synthetic motor oils, such as Castrol GTX Magnatec, offer a thin layer of lubrication to metallic components, allowing them to stay lubricated for extended periods of time.

As a result, most synthetic lubricants offer specific benefits over conventional motor oil, such as:

Synthetic oil often lasts longer than regular engine oil, which can help offset the greater expense of synthetic oils. When using ordinary oil, a person could change their oil every 3,000 miles, but only every 5,000 miles when using synthetic oil.

Changing from Conventional to Synthetic Oil

When synthetic oil was first invented, it was intended to be used exclusively in engines designed to be especially compatible with it. Esters, which are chemical compounds combined with alcohol, were utilized in older synthetic lubricants and were harsher on the components, particularly engine seals and gaskets.

The esters may cause wear, oil leaks, and maybe overheating issues. Synthetic lubricants now contain fewer alcohol components, and motor gaskets and seals have been designed to resist synthetic oils.

In general, transitioning from traditional to synthetic oil has three major advantages:

It is advised that you transition from traditional to synthetic products gradually. Here are some pointers to think about:

The only thing you should not modify is the recommended oil weight or viscosity. As long as you use the same weight of oil, switching from normal to synthetic or using a synthetic blend should be safe if the preceding procedure is followed.

How to Make the Transition from Conventional to Synthetic Oil

After you’ve used conventional oil, there’s no need to do anything unique before switching to synthetic oil. There are a Few Options for Making the Transition to using Synthetic Fuel Oil for the Very First Time.

Simply replace the oil and get started:

Request synthetic motor oil from your technician or the local quick lube. Alternatively, you may sweep out your drain pan or fix it yourself. You don’t need to do anything extra on your engine initially, as well as the synthetic oil won’t cause any additional difficulties in your car, such as broken seals.

To begin with, flush the engine:

Though not essential, an engine flush eliminates accumulated sludge and debris more quickly.

The key distinction between flushing the engine and changing your oil to synthetic oil is indeed the rate at which built-up junk is eliminated from older engines. For example, if you switch to synthetic motor oil without flushing, the detergents in the oil will remove accumulated deposits from the engine during consecutive oil changes.

The engine and transmission A flush speeds up the cleansing process and ensures that the engine is clean and clear of pollutants. Knowing why synthetic oil is superior to regular oil is only the beginning.

The following way is to build the change! Consult your technician as well as your owner’s handbook. Synthetic oils aren’t all the same, and not all vehicles can take them. Finally, the finest lubricating oil for your car is the one recommended by its manufacturer.

Before switching to synthetic motor oil, we recommend utilizing Engine and Transmission Flush if the engine has a shady maintenance history and you want to give it a fresh start.

Should you use synthetic oil?

Switching to synthetic oil might be a wise decision if your engine is capable of handling it. Synthetic oil is appropriate for engines with fuel injection, variable valves, turbochargers, or compressors that work at higher temperatures.

Unfortunately, there are several motor oil misconceptions that confound drivers when moving from conventional to synthetic oil. To debunk some popular misunderstandings about synthetic oil, let’s look at the top advantages of switching to synthetic oil.

In general, shifting to synthetic oil doesn’t really result in leakage. True, full synthetic is thinner than normal oil and hence flows more freely. If there is a location in your engine where oil might seep out, synthetic oil is much more prone to leakage than regular oil. The leak, however, would not be caused by synthetic oil.

You can’t go back to normal oil:

Once you’ve gone synthetic, you’re not going back. If your car manufacturer does not urge you differently, you can return to using standard oil. However, by taking better care of your engine, and continuing to use synthetic oil, you might be able to extend the life of your vehicle.

With traditional oil, you must break into a new vehicle:

Some people believe that you must break in a new vehicle by using conventional oil for a period of time before converting to synthetic oil. In actuality, no car manufacturer has given any advice on this technique. In reality, synthetic oil is currently used in many new vehicles as they leave the manufacturer.

In conclusion, we’ll tell you straight, you may safely convert to synthetic oil. However, knowing the specifics of what we’re discussing — especially why this topic has occurred in the first place — would be beneficial. And it does a lot of things.