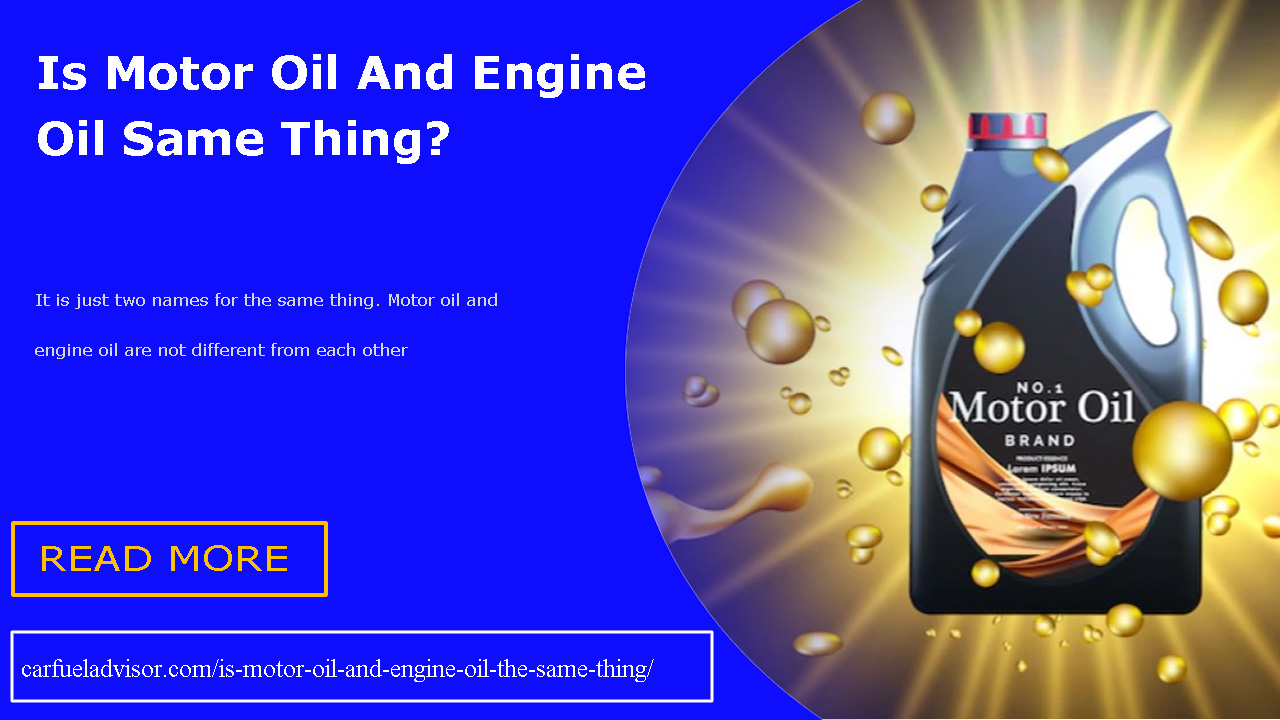 It is just two names for the same thing. Motor oil and engine oil are not different from each other. Manufacturers label oil in different names, and this is where the confusion arises among people. There is a lot more to know about motor oil or engine oil which will help you out with a better explanation.

There are two terms used; motor oil and engine oil. These words reciprocally cite the substance with base oil. If we try to differentiate the words ‘engine’ and ‘motor’, we fail.

Both engine and motor carry the same meaning of a machine that is designed to permute more than one form of energy into the machinery. It creates motion in the process and works thoroughly.

How Motor/Engine Oil Is Processed

Modern motor oils are made based on different types of base oil compounds depending on the type of engine manufacturers use and the performance capacity of each type of engine. It is one kind of lubricant.

Along with the compounds of base oil, engine oil or motor oil consists of some necessary additives. These additives perform numerous tasks that are required for the maintenance, performance, and health of vehicles’ engines.

All of these resources work with enforceability to produce the final form of motor oil. The base stock is made of petroleum and sometimes of a combination of both synthetic compounds and petroleum.

Petroleum is found after refining crude oil that includes such metal components as vanadium and sulfur. This process takes into account distinguishing different molecules present in the refined oil.

Manufacturers try to produce modern engine oils in terms of high-performing capability using a balanced proportion of the base oil and other additive elements.

A perfect composition looks like adding 78% of base oil, 10% of additives for viscosity improvement to better the flow, 3% of detergent substances to keep the engine clean, 1% for wear protection, 5% of dispersants for suspending the dirt shred, and 3% for other fellow improvements.

Motor oil performs a variety of tasks in favor of engine health. It is a mixture that works by reducing friction and keeping the engine clean, cold, and safe.

Let’s look at some of the properties of engine oil or motor oil that are important in every aspect.

The first type of variable describes the proportion between the thickness of the motor oil and the dynamic viscosity at a particular temperature.

Typical viscosities are classified from 20 to 60. If we use a fixed temperature, the larger number represents the higher viscosity of motor oil at that particular temperature.

Whereas dynamic viscosity focuses on the resistance of motor oil to flow at a lower temperature. The viscosity classes start from 0 and end at 25 with an interval of 5.

The smaller number represents the lower level of viscosity of motor oil at a cold temperature. Dynamic viscosity affects the speed in the beginning when the engine is quite cold, for instance.

The lower level of viscosity means that the cold engine will turn over with proficiency while starting.

In general, one can mix motor oils despite their types. Many manufacturers even encourage users to use the mixed form of different motor oils.

An individual may need to mix different engine oils when he cannot fulfill the requirement of topping up in any alternative way.

Moreover, people must be aware of not mixing synthetic motor oils with motor oils refined from mineral oils since it may eliminate the functions of synthetic oils.

Density can have a major impact on the effectiveness of cooling the engine. Materials’ heat capacity reflects the amount of energy required per gram to force a one-degree celsius heat.

Density expresses the reasons why oil heats up more effectively than other liquids. It defines that the heat capacity of engine oil is relatively lower which takes less energy while initiating any change in temperature.

It proclaims to have the material ability to shift temperature. Engine with higher thermal conductivity facilitates the continual temperature shifts. Engine oil helps by absorbing the heat and delivering it to a different location to let it dissolve.

The basic function of using motor oil is lubricating different parts of the engine. It ensures ease of operations.

Motor oil helps smoothen the constant friction of engine parts by lubrication. Since friction can have a serious impact on the functioning of the engine, using motor oil can reduce the maintenance cost waiting in the near future for users.

Motor oil processes by allowing the engine parts to glide gracefully during operation.

Engine oil performs both cleaning and cooling jobs for your engine. It is often overlooked that motor oil has the wonderful ability to keep the particular area of your vehicle clean. Motor oil is essential for maintaining good engine health. It cleans up combustion and dust. To cool down the engine, engine oil uses traps and releases through the lubricating circuit.

The basic components of motor oils have corrosion and oxidation inhibitors. At the time of operation, the fuel combustion fabricates corrosive acids that are inimical for the engine. Modern engine oils are combined with such additives that offend the process and offset corrosive power.

For the long life and quality performance of your engine, the usage of motor oil is unavoidable. Naturally, a well-cared engine is going to last longer than an abused one. The regular use of good engine oil helps lengthen the life of your engine by minimizing sludge.

The engine extracts fuel efficiency since motor oils help users keep their engines clean. A fresh engine always runs better than a dusty one. The mechanical output of the vehicle is also maximized to an extent that users enjoy the best performance at the time of riding.

We have come to know that the process of formulating motor oil or engine oil is serpentine. There is nothing to differentiate between these two.

If we look at the functions of these oils, they are enriched with indifferent properties and functionalities to protect the engine from any possible harm.

We can say that it is more important to pick a particular brand of engine oil for our vehicles by looking at the module rather than thinking about what makes motor oil and engine oil different from each other.