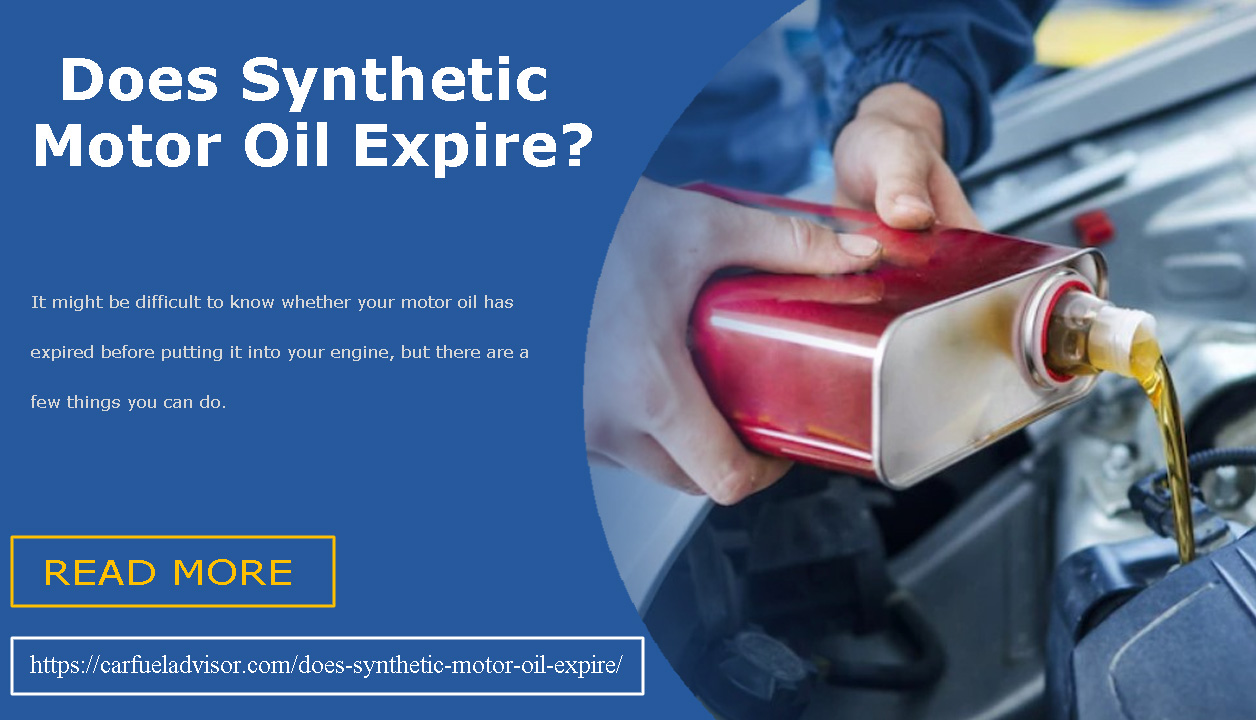 Are you wondering to know does synthetic motor oil expire & how to tell if it has expired? Unfortunately, there is no simple solution because the life of the oil is influenced by several factors. Some of the variables that must be addressed before deciding if synthetic oil may still be utilized are discussed below. This is a crucial issue since outdated oil may lack the preventive elements that might help safeguard your vehicle.

Everyone has had the experience of having to change their oil. Some drivers prefer to get their oil changed professionally by a local technician, while others prefer to do it themselves.

Regardless of the technique, you choose to replace your oil, you’ve probably had questions about it. Among the most frequently asked questions about oil is whether full synthetic oils may expire.

What Are the Opinions of Oil Producers?

Oil companies have a great stake in future motor oil sales. What’s the sense of producing something that never has to be replaced? Under ideal conditions-in the original unopened bottle and stored away from high temperatures-motor oil should last for an “extended duration.”

However, the shelf life of motor oil advised by each manufacturer differs. Mobil, for example, estimates that industrial or motor oils would last five years if properly maintained in their original containers. Meanwhile, Total, another major producer, advises that unused motor oil be discarded after only two years.

While many engine oil producers are hesitant to admit that their products expire, they do advise us to dispose of lubricants responsibly within a few years. Maybe it’s those vested interests all over again!

This also applies only to oils that have stayed intact in their original package and have been stored at the proper temperature.

How Long Does Motor Oil Last?

The trick is to follow the manufacturer’s recommendations for motor oil storage.

Extreme temperatures can have an impact on your motor oil even if it is unopened. Thermal breakdown may occur as a result of high-temperature extremes, reducing the oil’s viscosity, or weight and thickness in layman’s words.

If this oil is used, the flow rate around the engine will be lowered, which can lead to an increase in oil consumption, debris accumulation, and engine damage.

Sludge can accumulate when engine oil is kept at extremely low temperatures, clogging engine channels. This will eventually get too heavy to flow freely.

Oil thickening of any type can cause expensive engine damage. So, think about it: is it worth it to save a few bucks by using outdated oil?

What Happens If the Oil Bottle Is Opened?

Another probable source of deterioration in an unsealed container is oxidation. When air molecules combine with oil molecules, the viscosity of the oil increases, resulting in the formation of sludge or sediment.

Oxidized oil may also be more acidic, causing rust and corrosion on any metal surface with which it comes into contact.

In general, it’s best to keep any motor oil you buy sealed until you’re ready to use it.

Confirm the seal on any containers you purchase from a dealer to be sure they haven’t been unsealed, and always inspect opened bottles for signs of contamination or deterioration.

How to Identify If Your Motor Oil Is Expired

It might be difficult to know whether your motor oil has expired before putting it into your engine, but there are a few things you can do.

First, check the bottle to see whether it has an expiration date. If it’s over its expiry date, just toss it out.

Again, if you know the container of oil is moreover five years old, discard it instead of risking the harm it might cause to your vehicle and its many components.

Check the color of the oil if you’re unclear about the expiry or purchase date. It’s typically safe to drink if it’s got a pale brown tint and is clear. A much darker or black oil may suggest oxidation, but haziness or milkiness may indicate water or soil contamination.

Another important factor to consider is the oil’s consistency—oils that are solid, thick, or highly sticky are less effective than thin oils that pour readily.

Replace the container if there is any separation, mostly in oil or deposits on the bottom. Shaking the bottle will not cause the deposits in the oil to dissolve.

How Long Does Oil Last in Your Car’s Engine?

When oil is utilized in your automobile engine, it is more susceptible to a variety of elements that might harm it while it is still kept in a container. The engine’s mechanical motion causes increased temperatures, which might cause the oil to thicken over time. As it circulates, the oil will be more prone to contamination by soot or minute slivers of metal.

Other engine problems, such as a defective cooling system or water pump, might cause water to enter the oil and impact its viscosity. When you have a burst head gasket, your oil will become milky, almost cappuccino-like, and should be changed as soon as possible.

Environmental conditions such as cold temperatures can also cause the oil to develop a sludge, preventing it from flowing around the engine. Some synthetic oils have chemicals that inhibit oxidation or thermal reactions, allowing them to last longer before needing to be changed. Most experts recommend changing your car’s oil every few thousand miles, although some synthetic motor oils are supplied with 5,000- or even 10,000-mile warranties.

To be sure, ask your technician how frequently you should change the oil during your next scheduled vehicle maintenance, and make sure you use the best oil for your car and driving circumstances.

For a variety of reasons, synthetic oil lasts longer in your automobile engine and requires fewer changes.

Synthetic oils, like regular motor oils, can expire if not used for an extended length of time and must be properly kept.

The majority of the advantages will be for the automobile when employed in the engine. Some compounds in synthetic oils, particularly those that combat heat, will make storage simpler.

To summarize, most motor oils do not carry an expiration date, but rather guidelines for how long they may be stored.

These instructions also specify where it should be stored, at what temperature, and how frequently it should be changed in your engine.

Motor oil that has not been used in a long time may have thickened, which is bad for the engine, especially if it has been stored at an incorrect temperature.

If the bottle has been opened, keep the oil in a cool, dry location away from moisture and dust.

Using expired motor oil can cause major and costly engine damage, costing you far more than purchasing a new container of lubricating oil would have.

Make sure you only use the kind and quality of oil suggested by your car’s manufacturer in the owner’s handbook and that you replace it as needed.

If the containers of oil bottles in your garage have no expiration date and you’re not sure how long they’ve been there or how they’ve been stored up to this point, it may be advisable to dispose of them at your local recycling center rather than risk using them in your car.