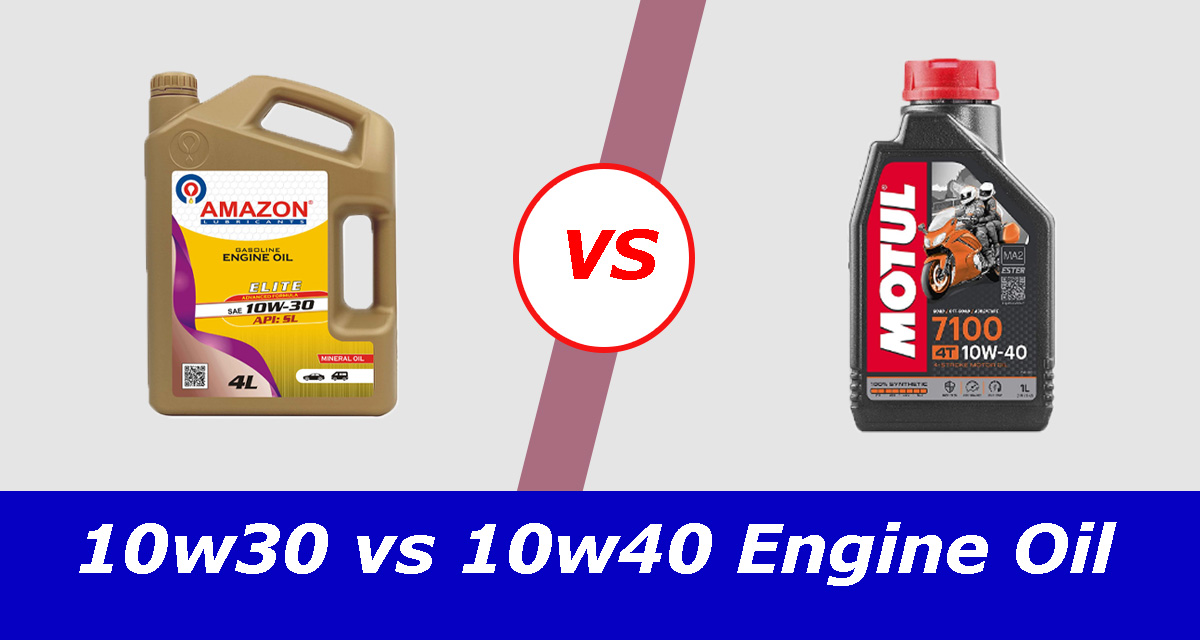 The oils 10W30 and 10W40 are fairly close. Both oils are versatile, multigrade oils that work well in a variety of temperature ranges.

With that stated, there must be some distinctions, right?

We’ll take a deeper look at these two oils to understand what they are and how they compare to one another, including their use in hot weather or high mileage engines. You’ll know more accurately what oil viscosity grade is best for your car if you do this.

Along with 15W-40, 5W-30, and 0W-20, SAE 10W-30 motor oil is among the low-temperature multi-grade fuels that are frequently suggested by manufacturers. This engine oil performs as an SAE 10 at sub-zero temperatures yet as an SAE 30 at normal operating conditions.

This oil is suitable for cold temperatures up to -30°C/-22°F. Even if you keep your wheeler outside the garage, cold-starting should go well.

In comparison to with an SAE 30 high-temp flow grade, this oil type maintains its thickness at 100°C/212°F and is more suited for hotter climates. Because it is more viscous, this oil resists heat breakdown and reduces deposit formation.

Low-viscosity oil grades 10W-30 and 10W-40 both include polymers that, depending on changes in oil temperature, can quicken up or slow down the pace at which engine oil thickens or thins.

They are available in both pure conventional and high-quality synthetic grades. It’s acceptable to use either 10W30 or 10W40 motor oil in the summer, however, 10W-40 lubricating oil will preserve your engine better.

Check out the following factors while picking between motor oil grades:

This is critical when deciding between 10W30 and 10W40 oil (and is the focal point of this read). While both winter-grade lubricants function similarly and decrease drag during cold starts, 10W-40 motor oil is viscous in hotter regions and has a wider temperature range.

Although the external temperature has no effect on the heat generated by your engine during operation, it does affect oil viscosity. This is why choosing the right oil depends so much on where you live. In comparison to a 10W-40, a 10W-30 motor oil would perform better in colder areas while a 10W-40 would perform better in hot climates at reducing engine wear and tear.

Because 10W-30 oil is more common and easily available, it is less expensive to use. Many car owners choose it over 10W-40 since it requires less energy from the engine to pump. However, it is not advisable to use this oil type for fuel mileage when it is not recommended by the manufacturer.

When choosing the less expensive alternative, consider the possible trade-off between engine lifetime and fuel cost-effectiveness.

Specifications from the manufacturer

It is advisable to follow the manufacturer’s recommendations for sufficient lubrication of your engine’s internal components. You have the choice to select the viscosity grade that is most suitable to your riding situations because several, if not most, car designers suggest more than one.

The qualities of two separate classes of oil are combined in 10W-40 and 10W-30, making them multigrade oils. They are sometimes referred to as “multi-weight oils.”

The grade before the “W” is one, while the grade following is two. But what exactly do these numbers mean? Let’s investigate more thoroughly.

The first value shows the viscosity of the oil at room temperature. Low temperatures are commonly defined as anything below 0°C. (32°F). Both 10W-30 and 10W-40 oils have a “10W” classification, which is an SAE grade for winter usage (thus the ‘W’ suffix).

At lower temperatures, these lubricants behave similarly to an SAE 10W single-grade oil. When a car is starting up, this figure is particularly crucial since the engine has to be lubricated quickly while it is still cold. More viscous and thinner oil is indicated by a lower number.

At higher temperatures, the greater the number, the more viscous or thicker the oil is.

The viscosity of 10W40 is greater than that of 10W30. This implies that 10W40 will have a more difficult time traveling around the engine’s components after being poured into it. However, by using 10W40 as opposed to 10W30, the oil will remain in place better and won’t leak out or spread throughout your engine.

Can 10W30 engine oil give a better performance vs using 10W40 for motorcycles?

As the temperature rises, 10W40 oil retains greater thickness than 10W30. In that situation, 10W-40 motor oil would ideally offer superior defense against interaction between engine wear and higher temperatures.

Motor oil with a 10W-30 or 10W-40 rating has little to no difference from the other. Temperature changes and engine load are what distinguish them. In mild conditions, either lubricating oil grade should work.

Once you start dealing with high-stress circumstances, your choices will be more critical. You may use any oil because they are both formulated to provide the same performance. Viscosity and base oil are two variances between the two oils.

For older engines that are burning or leaking oil, a higher viscosity oil, such as a 10W-40, might be beneficial. We provide MobilTM 10W-40 highly viscous motor oils for cars with over 75,000 miles, as well as a synthetic mix oil where cost is a factor.

However, generally speaking, I probably wouldn’t advise putting 10w40 in your lawn mower instead of SAE 30. What exactly is this? The majority of lawn mower motors are made to run on oil with a 30 viscosity rating. Because 10w40 has a greater viscosity, it may be more difficult for your engine to lubricate itself.

There is minimal distinction between these two types of engine oil. More so than anything else, temperature variations, engine health, and consumer preferences set them unique. Both motor oils are acceptable choices for normal weather conditions.

However, one could perform better than the other depending on the engine configuration, fuel budget, use of the vehicle, and riding style. Both engine oils, however, are effective in lubricating your wheeler’s engine enough, protecting it from corrosion, and aiding in its upkeep and safety.