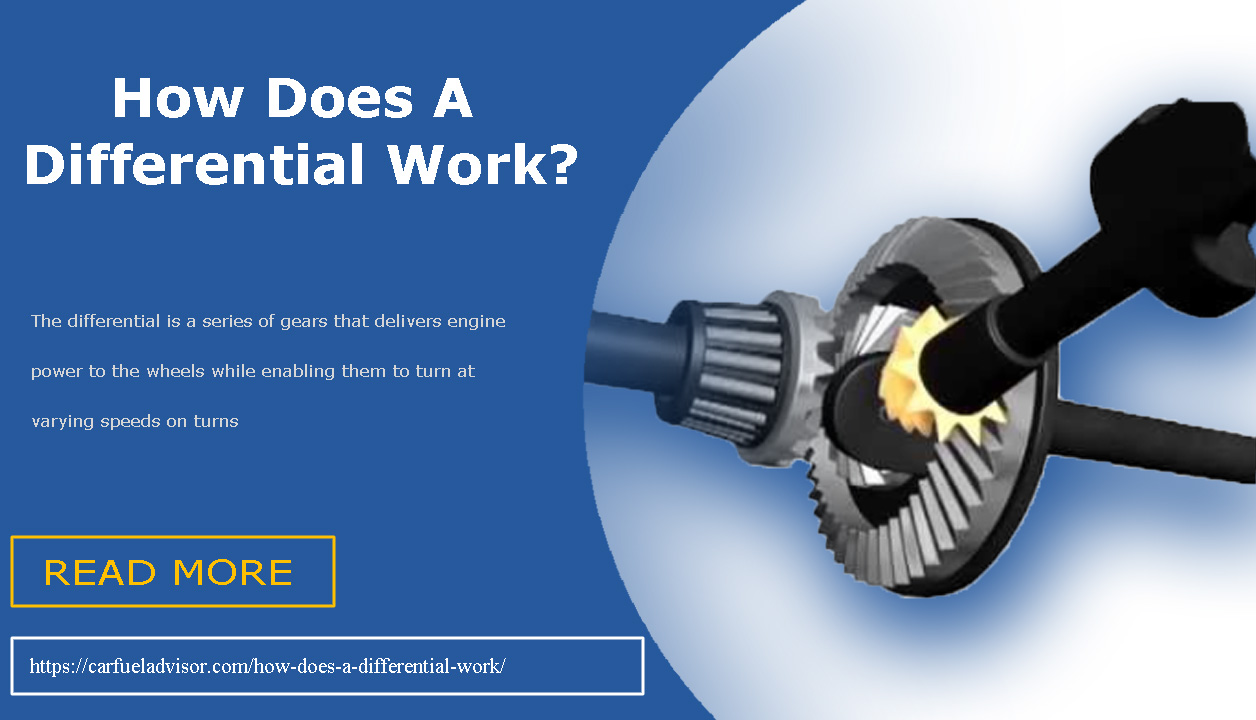 The differential is a series of gears that delivers engine power to the wheels while enabling them to turn at varying speeds on turns. The differential is housed with the transmission in housing with front-wheel drive (FWD), and the unit is known as a transaxle.

Every portion of a vehicle has a role in order to keep it moving while on the road. The differential is an important component that functions to apply torque (rotational force) to the driving wheels.

How did the differential receive its name? The differential has a root term that is different. The differential is a system that allows the drive wheels to turn at different speeds, which is necessary while the automobile is negotiating a turn. In a turn, the outside wheel must move farther, which implies it must travel quicker than the inner wheels.

Maybe you’ve heard the word already but just weren’t sure what this means or even how it works. If you’re unfamiliar with the function of a differential, it basically transfers power from your engine to your wheels.

The differential then controls how the energy is used after that. Open, limited-slip, locking, and torque-vectoring differentials are the most common types of differentials used between vehicles.

Continue reading to find out more about these types of differential systems, how differentials work, and why they are necessary.

This is the most basic sort of diff that just allows for changes in individual wheel speed or slip. In optimum road conditions, it permits the outside wheel to rotate quicker than the inner wheel. The problem emerges when driving conditions are less than optimal, such as on wet pavement, ice, snow, or gravel.

Most differential systems have open designs, which are thought to be the most dependable and straightforward.

The sole main disadvantage of an open differential is the potential of tire slippage in less-than-ideal situations. Engine torque will transfer regardless of whether a wheel has traction, forcing that tire to spin while the other tire accomplishes nothing.

Some vehicles, notably high-performance ones, employ a limited-slip differential rather than an open differential. Power is transferred to the opposite wheel if one wheel loses traction. This lowers wheel spin and, in a higher-powered FWD vehicle, helps avoid torque-steer — the propensity for a front-driver to pull from side to side when the throttle is pressed.

All limited-slips play the same role, however, how they do so differs depending on the kind. In a mechanical-clutch differential, clutch plates are located beside the gears, and when resistance is required, pressure rings push on the plates. An active differential system operates in the same way as a passive differential system, except it employs a computer to monitor driving conditions and engage the differential’s clutch. When a wheel slides, the fluid’s movement causes the friction discs to revolve at various rates, sending more power where it is required. Torsen differentials – a trademark name derived from Torque-Sensing supplement the differential gear set with worm gears to provide the required resistance.

A locking differential system is more likely to be found on off-road vehicles and, in rare cases, performance versions. It uses springs and clutches to engage locks, ensuring that the same amount of power is transmitted to each wheel regardless of traction. This effectively provides a fixed axle.

This differential joins the wheels, allowing them to spin at the same rate. Turning is often made more difficult as a result of this. Full-size trucks and Jeep Wranglers are examples of vehicles that utilize this type.

The benefit is that the locked differential may generate more traction since the entire amount of torque is always accessible to a wheel and is not restricted by the reduced traction of one wheel. This is a disadvantage at greater speeds, but it is a significant benefit when off-roading or rock climbing.

A torque-vectoring differential is the most complicated and advanced type of differential, utilizing a collection of detectors and electronics to receive data from various sources (road surface, throttle position, steering system, etc.) in order to activate electronically operated clutches and a controller.

How Does A Differential Work?

There are three roles for the differential:

If the vehicle is four-wheel drive, both the front and rear differentials may be present.

A differential is a gearbox with three common components: a side gear, a ring gear, and a pinion gear. Its function is to drive two wheels on an axle while enabling them to revolve at different rates.

This is required while your vehicle is turning on the road. As you move around a turn, the outside wheel must cover a greater distance than the inner wheel, thus it must spin quicker. This is made possible via the differential.

In this study, differential speed steering is investigated to replace traditional mechanical steering by leveraging the benefits of the independence of the motor driving an electric vehicle.

When the inner and outer wheels of a four-wheel-drive electric car are given differing speeds, the steering of the vehicle is altered.

The differential in cars and other road vehicles allows the outer drive wheel to revolve faster than the inner driving wheel during a turn.

This is required when the vehicle rotates, causing the wheel moving around the outside of the turning curve to roll farther and faster than the other.

Your differential performs an important function in steering your car and balancing the power between your tires. Maintain it in peak shape to ensure your safety while driving.

As previously said, differentials are something that everyone should be aware of since they may have a significant influence on your driving experience. This page is intended to provide just basic information and to merely scrape the surface of the many forms of differentials. I hope you found this information interesting and instructive!