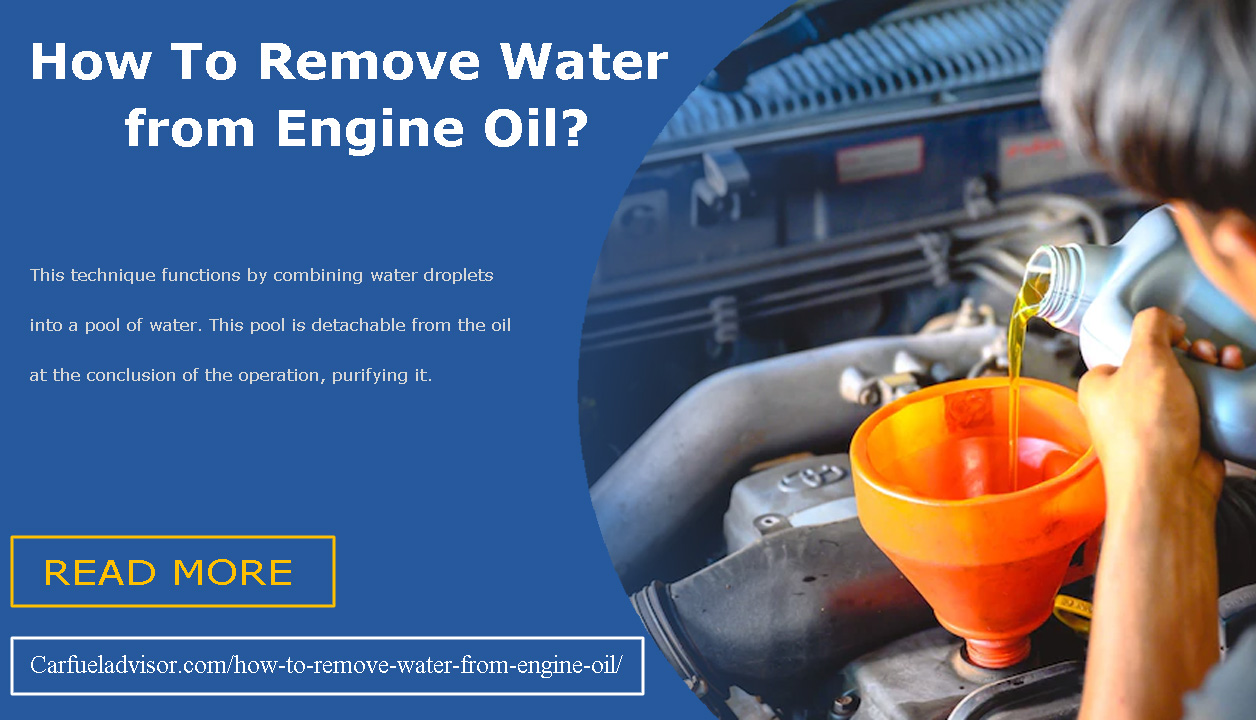 Though water is one of the vital things for humans, it’s not the same for your engines. If water gets inside our engines, that will cause quite a load of harm. Thus, it might be a nightmare for any driver to discover that there’s water in his car’s engine. Water in engine oil can cause extensive engine damage.

Therefore, the ideal solution would be to add seafoam to the oil and then have an oil change performed. If it’s a little quantity, you must repair the leak that produced it

There are several methods for removing water from motor oil. These techniques might be useful if you need to repair your engine or prevent water damage. This blog provides the complete procedure for you. So, Let’s begin.

How Can I Tell if Water is in My Motor Oil?

It’s easy to understand when water gets into your motor oil. It may cause a multitude of issues. It will, for instance, alter the oil’s basic stock, promote oxidation, raise viscosity, and permit foaming. Any motor oil that comes into contact with water is susceptible to a variety of problems and side effects.

The presence of water increases the likelihood of rust and corrosion, which will, in turn, lead to a faster rate of wear and tear. Aeration inevitably results in this undesirable outcome.

Additionally, water causes a change in viscosity, which might result in a variety of issues. Scalding and fragility caused by hydrogen, loss of the film’s strength, vaporous cavitation, etc.

On the other hand, water creates additional pollutants in oil. These include waxes, suspensions, insoluble carbon and oxide, and even microorganisms. These are simply three of the numerous effects water may have on an engine.

If left unresolved, it might lead to more severe problems and the eventual failure of your engine. Due to this, you must separate the water from the oil, which you may do using the following techniques.

How To Remove Water from Engine Oil?

This technique functions by combining water droplets into a pool of water. This pool is detachable from the oil at the conclusion of the operation, purifying it. This method’s filters are optimal for low-viscosity fluids.

Consequently, when viscosity increases, efficiency drops. A coalescer is incapable of handling solids. Therefore, only minute quantities of particles are required to block the filter. Therefore, ensure that the lubricating oil includes no particles that might clog the filter.

The system’s free water will settle to the tank’s bottom. The time required for the water to separate depends on the temperature of the system, the additive formulation, the age of the oil, and the kind of base oil. Some oils are intended to suspend water rather than enable it to separate, rendering gravity separation ineffective.

Reducing the point of saturation ensures that as much water as possible exists in the free state. In higher volume installations, a separate emptying tank may be used to chill and demulsify the oil prior to water removal.

Another common way of removal is centrifugal force. This procedure separates two fluids of differing densities. Because oil and water have differing densities, this force can separate them. Once the oil has been cleaned, it is returned to operations. The water would then be stored in a tank for further processing.

This approach is superior to the first since it can remove solid pollutants. Consequently, it can function without trouble even when solid particles are present. In addition to these two approaches, an additive can also be used to remove water from engine oil.

Using the basic approaches outlined above, water contamination in engine oil may be simply eliminated. However, when the amount of water in engine oil decreases, gravity and other mechanisms become less efficient. There are several chemicals that may be employed to absorb the little quantities of water contained in motor oil.

What Happens if Water Gets in Your Engine?

How much water does it take to damage an engine?

Actually, sometimes it depends on the engine. However, passenger vehicles can have as much as 15 centimeters (6 inches) of water reach their floors, and if this occurs, it can trigger a chain reaction that causes irreparable damage to their engines.

How long does it take for an engine to dry out?

Minimum 20 minutes. This is the way to dry out your flooded engine. Simply open your car’s hood and let the surplus petrol drain for as long as possible. After approximately 20 minutes, attempt to restart your vehicle without pressing the gas pedal.

How much water in oil is bad?

Typically, the more additives an oil has, the more hygroscopic (water-attractive) it becomes. One percent of water in oil can lower a journal bearing’s life expectancy by as much as 90%. Acceptable values of dissolved moisture range between 50 and 300 ppm (or 0.0050 and 0.0300 percent).

Water in engine oil may create several issues. Therefore, it would be better if you took action quickly after learning about it. When water is added to oil, it becomes a frothy or bubbly substance. This oil would increase friction rather than provide lubrication.

Therefore, any engine operating on murky oil is susceptible to failure and collapse. This issue can be resolved by centrifugal force or cementation. Additionally, you can cure it by adding a dispersant based on alcohol. So, This article has been a complete guide for you.